Recently I covered for Travelujah in collaboration with Catholics for Israel the commemoration of the 70th anniversary of the Wannsee Conference, organized by the International Christian Embassy Jerusalem.  Following the moving wreath-laying ceremony at the Yad Vashem Holocaust Museum, I interviewed a unique pair of friends just outside the Hall of Remembrance.

Maren Steege is a young Christian woman from Stuttgart in Germany, and Eliel Fos is a young Israeli Messianic believer from Haifa. As leaders of the “Yad b’Yad” program, they regularly take teams of German and Israeli youth on reconciliation missions to Auschwitz. 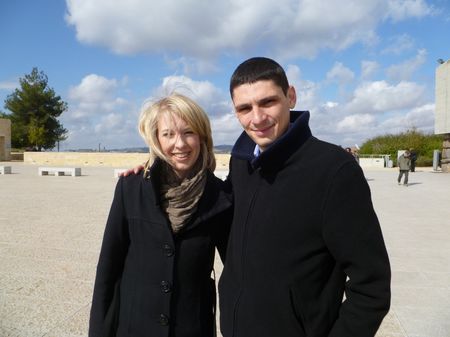 “Yad b’Yad,” which means “Hand in Hand” in Hebrew, expresses the organization’s goal to lead Israeli, German and Polish youth to walk hand in hand through Auschwitz, overcoming their pain and shame with the love of God. By guiding young people on a cultural, social, spiritual and historical journey to God’s grace, forgiveness, and power of reconciliation, Yad b’Yad teaches them to overcome the dark history of the past and create hope for future generations.

In the midst of the sober ceremony remembering Wannsee’s “Final Solution,” the smiling faces of Maren and Eliel in the brisk January wind were in themselves a living testimony that their commitment for reconciliation is working.

Maren, what brings you here today?

Maren: I came here from Germany with a delegation of 70 people representing Christian organizations. We have a heart not just for Israel in general but also for the individual persons here.

Eliel, how does it feel to see all these German and Austrian pastors here?

Eliel: It’s very special to be with this group because they represent such a major part of Germany. They are making a strong statement in saying: “we will stand with Israel.” This is something that is really encouraging to see as an Israeli and as a Jew. It’s also very special to be here together with Maren because we went to Auschwitz together as part of the “Yad b’Yad” program.

How did it feel to go and lay a wreath together, as a German and an Israeli?

Maren: For me, it was a real honor. In my heart, there are two sides beating together: on the one hand, even though I don’t look like it, I have Jewish blood in my ancestry line. On the other hand, I also have a great-grandmother who had quite a high position in the Nazi regime. It took us a long time – many years – for us as a family to overcome that.

I just met her once, when I was 1 1/2 year old. When she saw that my brother and I were the only ones in the family who were blonde with blue eyes, somehow we had the feeling that she wanted to pick us out in a sort of idolatrous furthering of the ancestry line. Somehow I was a “chosen one” for her. But I decided to do the opposite in my own life, and to really stand with Israel. And so I’m very honored to stand here… it’s something that words cannot express.

It’s also a privilege to be able to organize these youth exchanges, because it’s not just with words but also with deeds that we can really change something.

What do you think is the most important thing for young people in the future, and how is all of this connected to your faith?

Eliel: I think there’s an important lesson to be learned in this place – and the young people really have to learn it. It’s our history, our past, but these kinds of things can also happen today. The problem is that people don’t learn… they forget. And it’s hard for young people to relate to what happened because your mind cannot contain it.

For Israel, the Holocaust is a national wound, and it’s a wound for every Israeli. I think there is no way out of it apart from the cross and Jesus. He is the one who can take this burden from us and bring healing into our heart, with true reconciliation based on true love between our two nations.

Can you tell us more about the trips you lead to Auschwitz?

Eliel: We first took the Israeli kids – all believers in Yeshua – to Maren’s church in Stuttgart.  Then we went together to Auschwitz, and it was a very deep time.

Maren: When we go there, every Jewish teenager has a German partner. So the Israelis don’t go there saying in a general way “these are the Germans who did this” because you cannot deal with such a large mass of people. But at that moment you have your German partner with you, one person who is an individual. In the first week of the program, they already build good friendships, and then finally they come to Auschwitz.

When we talk with the youth and ask them: “what is your biggest fear, what are you most afraid of?” they often answer: “that the experience in Auschwitz changes our friendship, that it breaks something.”  And the Germans kids say: “maybe my Israeli friend will not be able to look at me anymore.”

I remember a situation last time, when we were standing there in the gas chamber. There was a boy – he was about 16 years old… at that very moment, he took a picture out of his pocket. It was a picture of his grandmother, and he said: “it was here where she took her last breath.”

Then we had a ceremony, and I must admit that seeing the young teenagers, my mind could not really grasp what happened there. But I know that it’s really worth it to invest in friendships with Israel – not just superficial friendships but deep ones, because friendships will be like a bridge between us.

* * * * *
Ariel Ben Ami was born in Canada and is currently a doctoral student at the Hebrew University of Jerusalem and writes regularly for Travelujah-Holy Land Tours. He is fascinated by the Jewish roots of Christianity and enjoys writing about biblical and theological topics. He is the founder and director of Catholics for Israel, a lay apostolate dedicated to building bridges and fostering reconciliation between Israel and the Church.
CONTACT US HERE